There is nothing like a good book in the summertime. Today, we present reviews of two recent summer releases. First up, Will Preston reviews our Volume VII judge Rebecca Makkai’s latest novel The Great Believers. Preston writes: “With this, her fourth book, Makkai has crafted a deeply compassionate character study that is also a genuine, one-more-chapter-before-bed pageturner, a sweeping historical saga that never loses sight of its emotional core.”

Next, Katharine Coldiron reviews Eleanor Kriseman’s debut novel The Blurry Years. Coldiron writes, of the book’s narrator: “Callie is a heroine to remember, a perfect personification of the era of adolescence when decisions were easily made and long regretted. She doesn’t reflect much on her behavior, or offer evidence that she understands why she acts so self-destructively. This isn’t a negative quality; it’s another piece of the book’s authenticity.” 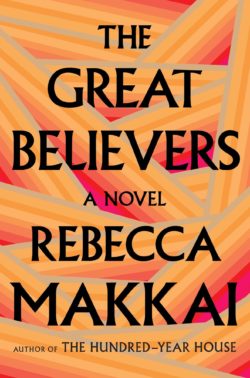 The Great Believers by Rebecca Makkai

The Great Believers, Rebecca Makkai’s magnificent new novel, opens at a funeral. More specifically, it opens at a funeral party. The actual funeral, for a young man named Nico Marcus, is unfolding concurrently twenty miles north: it’s 1985, and Nico is dead from AIDS, and his family has made it abundantly clear that his lover and tight-knit circle of friends are unwelcome at the church where he is being laid to rest.

About halfway through the night, one of Nico’s closest friends, Yale Tishman, is overcome with emotion and retreats upstairs to collect himself. When he emerges, some thirty minutes later, he is greeted by a surreal sight: the party has been abruptly abandoned. Half-drunk bottles and cocktail glasses are scattered throughout the room; the vinyl record spins in silence. Both doors are dead-bolted. The Blurry Years by Eleanor Kriseman

If you’re a reader, you can run, and you can hide, but you can’t escape the coming-of-age story. It’s everywhere, a part of every era, a constant of literature as immovable as Hemingway himself. The only new ground is generational: the story varies depending upon the age of the person telling it. For Millennials, the variation arrives (at last) in the storyteller. Women, queer people, and people of color are telling their stories at last, which means that the coming-of-age genre has some new life in it for the first time in decades.