Today, Cole Meyer reviews Imbolo Mbue’s notable debut novel, Behold the Dreamers. The book follows a young Cameroonian family that immigrates to the United States in the years leading up to the Great Recession. Meyer writes: “Behold the Dreamers feels as though it’s needed right now: a novel about the strife of the immigrant, often overlooked or ignored, in the midst of an influx of refugees.” Add this to your reading lists, everyone. 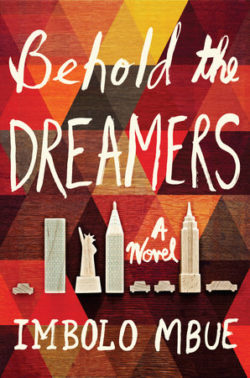 Imbolo Mbue’s Behold the Dreamers follows a Cameroonian family as they immigrate to the United States in the years before the financial collapse of 2008. This debut novel explores the complicated relationships between where we’re from and where we end up living, between love and family, sacrifice and reward.

Jende Jonga leaves Limbe, Cameroon for the US in 2004 and secures a job as a livery cab driver three years before his wife and son’s immigration. With the help of his cousin, Jende becomes a chauffeur for Clark Edwards, an associate at Lehman Brothers. When Jende arrived in the US, at the advice of his immigration lawyer, he applied for asylum, with an invented story of persecution at the hands of his father-in-law, a plan which quickly falls apart. Jende’s wife, Neni, travels to the country on an academic visa, with hopes of becoming a pharmacist. The financial crisis is steadily approaching, but Mbue places personal road bumps for the Jongas along the way, foregrounding their struggles. Read more.