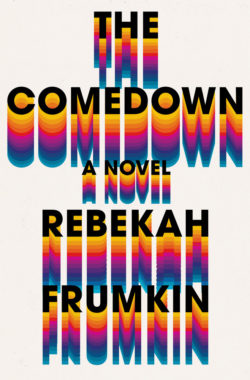 I always have a good feeling about a book that opens with a family tree. Something about the promised sprawl, the delicious intrigue captured in those many dates, arrows, question marks, and crisscrossing lines. Rebekah Frumkin’s debut novel does not disappoint on this front. The Comedown is sprawling, and it is full of intrigue: a vanished father figure, a suitcase full of drug money, a pair of vindictive half-brothers, lots of ill-advised sex. Though the overarching plot can be hard to track, the book delights at the sentence level, where Frumkin masterfully assembles the small details that illustrate two families’ capacities for ruthlessness and love.

The Comedown opens in a hotel in Tampa in 1999 with Leland Bloom-Mittwoch Sr., a drug addict whose troubled legacy will haunt almost every other character for the next three hundred pages. Leland Sr.’s life has been marked by strife, much of it of his own making, yet as he marches up to the Hyatt’s roof where it becomes clear he plans to kill himself, he “[makes] a little movie in his head with scenes of all the people who’d loved him.” It’s a tender moment, the first of many where Frumkin showcases her ability to sympathetically render people who are not always kind to others, and rarely kind to themselves.

From there, the novel backtracks to the 1950s and the early childhood of Leland Sr.’s first wife, Melinda. We learn of the body image issues that marked her formative years, and then accelerate to 2009, where she’s dealing with the fallout of her son Leland Jr.’s mysterious drug-induced fit. This leaping through time is typical of the novel’s structure, which is not linear so much as stacked. Each chapter offers a window into the experience of a single character. Each character is connected to Leland Sr. or to his one-time dealer, Reggie Marshall. Often, the plot revisits previously-depicted events; we see the fateful night Reggie is shot first from his perspective, and then from Leland Sr.’s. When successful, this backpedaling creates a powerful sense of dramatic irony, like watching a car hurtle down the highway, knowing exactly where it’s going to crash. It also muddies the connective tissue between the Bloom-Mittwoches and the Marshalls. While it’s evident the two Cleveland families are bound by the tragedies of their patriarchs, their specific debts and expectations are sometimes lost in the intimate portraits of each character’s life.

In its structure, The Comedown recollects a novel-in-stories like A Visit from the Goon Squad, but there are further comparisons to be made between Frumkin’s novel and Egan’s: Both function as studies of relationships across time, both grapple with suicide and addiction, both are loaded with references to changing fashions and technologies. While reading The Comedown, I also found myself thinking of one of my favorite novels, The Bell Jar. Like Plath, Frumkin has a gift for chronicling a character’s self-destruction in a way that is utterly lucid, even beautiful. The first time he does cocaine, Leland Sr.’s world brightens. A reader would be hard-pressed not to feel swept up in his expanding joy:

How could he explain to his mother the way he felt after that, like his brain worked as it had always intended to work? How could he describe the way the room looked, the way his thoughts moved, the big, bright faces of all Mickey’s juvie friends shouting about how smart and funny he was?

It is Frumkin’s close attention to the rich inner lives of her characters that allows her to convincingly narrate such a wide spectrum of experience: the guilty privilege of a lieutenant governor’s daughter, the barriers faced by an aspiring black academic, the quest of one resilient young person to discover their gender identity, the dreams of a rabbi for a congregation that truly welcomes all. A cast this diverse opens up a lot of opportunities for interesting conversations about race, gender, sexuality, faith, and class—and Frumkin has them, but never at the expense of the characters’ particularities. I enjoyed this book most when I was able to sink into those particularities, when I had gotten a few pages into the next chapter and accepted that it might be a while before the larger narrative picked up.

The Comedown is a bold family epic that should appeal to fans of intergenerational sagas. Frumkin’s fictional universe is realistically messy; Maria Timpano, a girl whose childhood illness leaves her blessed or cursed with incredible intellect, puts it best when she thinks “what a busy and complex place the world was and how she scarcely fit into it.” The Comedown is busy, and it is complex, yet as the connections between characters clarify, we’re left with a sense of impending confrontation that helps drive the narrative to its surprising—and ultimately satisfying—conclusion.