We’re so pleased to include Featured Fiction in our publishing platform. Featured Fiction allows us the opportunity to showcase work from established authors. While our focus remains on new and emerging talent, we feel the best way to grow as a writer is to read the kind of work that shines, glows, and inspires. Interested? Read on. 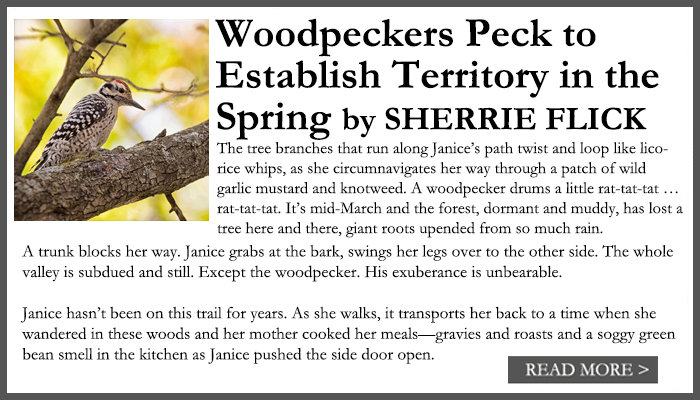 Sherrie Flick is the author of the novel Reconsidering Happiness and two short story collections, Whiskey, Etc. and Thank Your Lucky Stars. Her fiction has appeared in many anthologies and journals, including Flash Fiction Forward, New Sudden Fiction, and New Micro, as well as Ploughshares, New World Writing, and Wigleaf. Her awards include fellowships from Sewanee Writers’ Conference, Pennsylvania Council on the Arts, and Atlantic Center for the Arts. She served as series editor for The Best Small Fictions2018 and is co-editor for Flash Fiction America, an anthology forthcoming from W.W. Norton. Adrian Van Young (adrianvanyoung.com) is the author of Shadows in Summerland and The Man Who Noticed Everything. His work has appeared in Black Warrior Review, Electric Lit’s Recommended Reading, Conjunctions, Granta, Slate, The Believer and The New Yorker, among others. He lives in New Orleans. This story is dedicated to his creative writing students at St. Martin’s Episcopal, who helped him iron out some kinks. Kathy Fish has published five collections of short fiction, most recently Wild Life: Collected Works from 2003-2018, from Matter Press. Her award-winning short stories, prose poems, and flash fictions have been published in Denver Quarterly, Indiana Review, Electric Literature, Guernica, and elsewhere. Fish’s “Collective Nouns for Humans in the Wild,” which addresses the scourge of America’s gun violence and mass shootings, will appear in an upcoming edition of The Norton Reader. The piece was also selected by Sheila Heti for Best American Nonrequired Reading 2018, and by Aimee Bender for Best Small Fictions 2018. Fish’s work was previously chosen for the 2017 edition of Best Small Fictions by Amy Hempel and for the 2016 edition by Stuart Dybek. Additionally, two of Fish’s stories are featured in the W.W. Norton anthology, New Micro: Exceptionally Short Fiction. She is a core faculty member in fiction for the Mile High MFA at Regis University in Denver, Colorado. She also teaches her own intensive online flash workshop, Fast Flash©. For more information, see her website: kathy-fish.com. Chaya Bhuvaneswar is a physician and writer with work in Narrative Magazine, Tin House, Electric Lit,  The Millions, Joyland,  Michigan Quarterly Review and elsewhere. Her poetry and prose juxtapose Hindu epics, other myths and histories, and the survival of sexual harassment and racialized sexual violence by diverse women of color. Her debut collection WHITE DANCING ELEPHANTS is out now, as of Oct 9 2018, by Dzanc Books and is available at amazon.com, dzancbooks.org (use coupon code GOODREADS) as well as indie booksellers. She has received a MacDowell Colony fellowship, Sewanee Writers Conference scholarship and Henfield award for her writing. Follow her on Twitter at @chayab77 including for upcoming readings and events. Ron Rash is the author of the 2009 PEN/Faulkner Finalist and New York Times bestselling novel Serena, in addition to five other novels, including One Foot in Eden, Saints at the River, The World Made Straight, and Above the Waterfall; five collections of poems; and six collections of stories, among them Burning Bright, which won the 2010 Frank O’Connor International Short Story Award, Chemistry and Other Stories, which was a finalist for the 2007 PEN/Faulkner Award, and most recently, Something Rich and Strange. Twice the recipient of the O. Henry Prize, he teaches at Western Carolina University. Jac Jemc is the author of The Grip of It (FSG Originals). Her first novel, My Only Wife (Dzanc Books) was a finalist for the 2013 PEN/Robert W. Bingham Prize for Debut Fiction and winner of the Paula Anderson Book Award, and her collection of stories, A Different Bed Every Time (Dzanc Books) was named one of Amazon’s best story collections of 2014. She edits nonfiction for Hobart, and has taught creative writing at the University of Notre Dame, Illinois Wesleyan, Northeastern Illinois University, Lake Forest College and Loyola University. Lydia Davis’s most recent collection of stories is Can’t and Won’t (Farrar, Straus & Giroux, 2014). Among other works, she is also the author of the Collected Stories (FSG, 2009), a new translation of Flaubert’s Madame Bovary (Viking Penguin, 2010), a chapbook entitled The Cows (Sarabande Press, 2011), and a long narrative poem entitled “Our Village” in Two American Scenes (New Directions, 2013).  In 2013 she received the Award of Merit from the American Academy of Arts and Letters and the Man Booker International Prize for her fiction. She lives in upstate New York. Brian Evenson is the author of numerous books of fiction, most recently the story collections A Collapse of Horses and Windeye (Coffee House Press), and the novel Immobility (Tor). Both Windeye and Immobility were finalists for a Shirley Jackson Award. His novel Last Days won the American Library Association’s award for Best Horror Novel of 2009. His novel The Open Curtain (Coffee House Press) was a finalist for an Edgar Award and an International Horror Guild Award. Other books include The Wavering Knife, which won the IHG Award for best story collection, Dark Property, and Altmann’s Tongue. He has translated work by Christian Gailly, Jean Frémon, Claro, Jacques Jouet, Eric Chevillard, Antoine Volodine, Manuela Draeger, David B., and others. He is the recipient of three O. Henry Prizes as well as an NEA fellowship.His work has been translated into French, Italian, Spanish, Japanese and Slovenian. He teaches in the Critical Studies Program at CalArts. 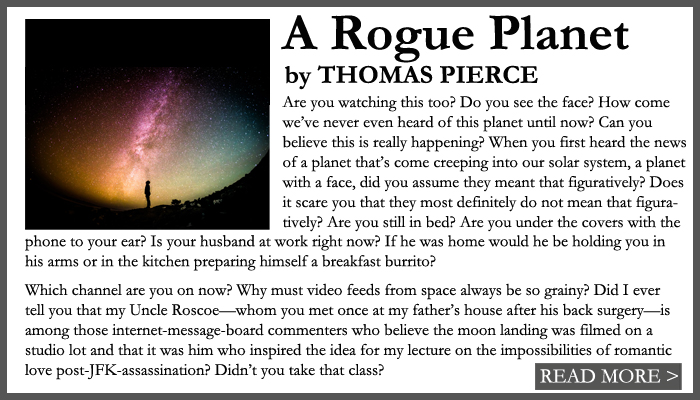 Thomas Pierce is the author of the short story collection, Hall of Small Mammals. His stories have appeared in The New Yorker, The Atlantic, The Oxford American, Virginia Quarterly Review, The Best American Non-Required Reading, O. Henry Prize Stories, and elsewhere. Born and raised in South Carolina, he received his M.F.A. from the University of Virginia as a Poe/Faulkner Fellow and currently lives in Charlottesville, VA with his wife and daughters. Katie Chase is the author of the story collection Man and Wife (A Strange Object, 2016). Her short fiction has appeared in the Missouri Review, Narrative, and The Best American Short Stories and Pushcart Prize anthologies. A graduate of the Iowa Writers’ Workshop, she has also been a fellow of the MacDowell Colony and the Center for Steinbeck Studies. Born and raised outside Detroit, Michigan, she lives currently in Portland, Oregon. Julia Elliott’s writing has appeared in Tin House, the Georgia Review, Conjunctions, The New York Times, and other publications. She has won a Rona Jaffe Writer’s Award, and her stories have been anthologized in Pushcart Prize: Best of the Small Presses, Best American Fantasy, and Best American Short Stories 2015. Her debut story collec­tion, The Wilds, was chosen by Kirkus, BuzzFeed, Book Riot, and Electric Literature as one of the Best Books of 2014 and was a New York Times Book Review Editors’ Choice. Her first novel, The New and Improved Romie Futch, arrived in October 2015. Adrian Van Young is the author of The Man Who Noticed Everything (Black Lawrence Press, 2013), winner of the 2011 St. Lawrence Book Award for a collection of stories; an occult mystery serial novella, A New Orleans Murder Mystery for The-Line-Up.com; and the novel Shadows in Summerland, forthcoming in April 2016 from ChiZine Publications. His fiction and non-fiction have been published or are forthcoming in Lumina, Gigantic, The American Reader, Black Warrior Review, The New Orleans Review, VICE, Slate and The Believer, among many others. He is a regular contributor to Electricliterature.com. He lives in New Orleans with his wife Darcy and his son Sebastian. See more at: adrianvanyoung.com 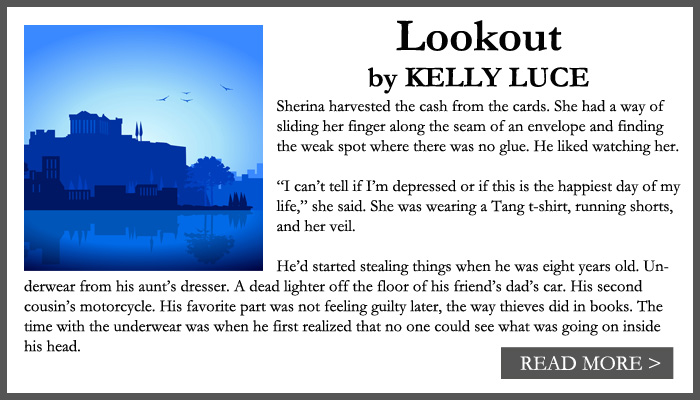 Kelly Luce’s story collection, Three Scenarios in Which Hana Sasaki Grows a Tail (A Strange Object), won the 2013 Foreword Review’s Editors Choice Prize in Fiction. Her work has appeared in O Magazine, The Chicago Tribune, Salon, Electric Literature, The Southern Review, and other magazines. She’s the editorial assistant for the O. Henry Prize anthology. Her debut novel, Pull Me Under, is forthcoming from FSG. She hails from Illinois and lives in Santa Cruz, California.

Michael McGriff’s books include Home Burial, a New York Times Book Review Editors’ Choice selection; Dismantling the Hills; a translation of Tomas Tranströmer’s The Sorrow Gondola; and an edition of David Wevill’s essential writing, To Build My Shadow a Fire. He is a former Stegner Fellow and Jones Lecturer at Stanford University, and his work has been recognized with a Lannan Literary Fellowship and a grant from the National Endowment for the Arts.

JM Tyree is the author of BFI Film Classics: Salesman, and the coauthor, with Ben Walters, of BFI Film Classics: The Big Lebowski, from the British Film Institute. His writing on cinema has been published in Sight & Sound, The Believer, and Film Quarterly. A former Truman Capote–Wallace Stegner Fellow in Fiction at Stanford University, he currently works as an associate editor of New England Review. Kate Bernheimer is the author of a novel trilogy and the story collections Horse, Flower, Bird and How a Mother Weaned Her Girl from Fairy Tales, and the editor of four anthologies, including the World Fantasy Award winning and bestselling My Mother She Killed Me, My Father He Ate Me: Forty New Fairy Tales and the current World Fantasy Award nominee xo Orpheus: 50 New Myths. Her books have been translated into Chinese, French, Greek, Korean, Italian, Russian, Spanish, and other editions. She is an Associate Professor of English at the University of Arizona in Tucson, where she teaches fairy tales and creative writing. Ben Hoffman is the author of a chapbook, Together, Apart. His fiction has won the Chicago Tribune’s Nelson Algren Award and Zoetrope: All-Story’s Short Fiction Contest and appears in The Missouri Review and tinhouse.com. He is currently the Carol Houck Smith Fellow at the Wisconsin Institute for Creative Writing. Manuel Gonzales is the author of The Miniature Wife and Other Stories. A graduate of the Columbia University graduate creative writing program, he has published fiction and nonfiction in Open City, Fence, One Story, Esquire, McSweeney’s Quarterly Concern, and The Believer. He lives in Austin, Texas, with his wife and two children.