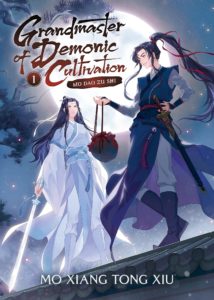 Recently, I’ve been struggling with what it means for a piece of writing to have literary merit. The book that has me so vexed is Grandmaster of Demonic Cultivation, by Mo Xian Tong Xiu, which is newly available in English in an uncensored form.

My interest in the novel sprung from its film adaptation, The Untamed. For those who haven’t had the pleasure, The Untamed is a webseries, available in the West on Netflix. It’s fifty-plus hours of sword fighting, sorcery, makeup, flowing robes, the undead, and, somewhat puzzlingly, long, meaningful glances between the show’s two male leads. In China, where it was created, it’s even more popular. On the streaming platform Tencent Video, the series has over ten billion views, and has won major drama awards.

The series’s popularity is all the more surprising because of its source material. Grandmaster of Demonic Cultivation is a gay romance novel, originally published online. The book is smut, and proudly so, but it is a truly exceptional kind of smut, because even with its raison d’être removed to meet stringent Chinese laws banning “vulgar” content, the television adaptation can still limp along. This is because Grandmaster of Demonic Cultivation is a deeply queer fantasy novel, where LGBTQ+ touchstones are expertly woven into a high fantasy landscape.

The series follows Wei Wuxian, a cultivator killed for following the demonic cultivation path, despite his bravery in a campaign against the Wen Clan, a tyrannical militant sect. A decade after his death, a disgraced homosexual cultivator trades his own life to bring him back from the dead and exact revenge his family. Thrust into the world in the body of a gay lunatic, he faces the aftereffects of his previous life.

The novel’s romantic thread lies between him and a reserved cultivator, Lan Wangji, a widely respected member of his clan and the broader world. His sect privileges order and self-discipline above all else (their sanctuary, for example, is renowned for having over three thousand rules, proscribing everything from speaking behind another’s back to hurried walking). His attraction to Wei Wuxian throws him into internal turmoil, and compels him to break the rules of his upbringing. The series carries a 17+ rating; however, the first volume does not contain any explicit descriptions of sexual acts. Instead, it is propelled by longing glances, cheeky teasing into and out of each other’s beds, and lurid descriptions of male bodies holding swords.

For an example of a queer reading of high fantasy, look to one of the book’s side characters, Nie Huaisang. Introduced as a frivolous character, interested in only expensive fans and pornography, Nie Huaisang initially appears to be a disappointment to his brave warrior ancestors. Later, though, the picture is complicated when Wei Wuxian and Lan Wangji discover a Nie family tomb, where a dangerous family artifact (his father’s sword, brimming with malevolent energy) is kept in stasis by a tightly controlled balance of reanimated corpses. Nie Huaisang, born into a machismo family culture that would eventually destroy him, instead chooses the more difficult path: He rejects the family magic, and controls the metaphorical family skeletons with literal skeletons. His turn towards the demonic arts is necessary to reject the toxic masculinity of his forebears, and to live authentically as himself. Though dismissed by his clan and the broader world for his poor swordsmanship, he instead cultivates the more difficult skill of diplomacy, installing himself as a powerbroker across the clans. Nie Huaisang’s story isn’t just good fantasy storytelling, it’s also a uniquely compelling queer rendering of high fantasy tropes.

But it’s in the ordinary items and ethos of the novel that true world-building is done. There are ancient tomes and rarified cloud sanctuaries, but most of the magic in the novel is done with paper artifacts and easily obtainable items from the natural world. Acts of rebellion are carried out with bottles of Empress’s Smile, a forbidden liquor that comes in round bottles just small enough to conceal in a cloak’s sleeve. Spiritual artifacts such as magical swords and musical instruments abound, but they are not necessary to perform great magic, and for this first volume Wei Wuxian uses only a jury-rigged flute made from an ordinary shoot of bamboo. The world of Wei Wuxian is in many ways anti-capitalist, obsessed with mastery and social status more so than material wealth. His crime in his past life, in fact, was forming a kind of radical utopia for his adoptive family, protected by demonic magic the world forbids, perhaps an allusion to the many real-world attempts at queer utopia.

Much like a translation of a Russian masterpiece, each character has many names to keep straight: a birth name, a courtesy name, a sobriquet, and a variety of nicknames and diminutives. The translator has also chosen to preserve Chinese terms for relationships, such as gege, mei, or xiongzhang, which have no English equivalent. The rich wordplay present in the sobriquets, clan names, and relational names is opaque to an uninitiated reader, but those who spend time with the included glossary will be richly rewarded. There are other challenges facing the prose at the sentence level, where adjectives and subclauses abound. The reader will be surprised by idiosyncratic punctuation such as an exclamation point preceded by a tilde (~!) to denote a wry exclamation, or an ellipsis enclosed by quotation marks to denote an intentional silence (“…”). The combination of high and low gives the prose a joking quality, earnest even as it winks.

Speculative fiction, queer fiction, and fiction originally published online have all been more or less ignored by mainstream literary circles. Though a cultural touchstone, E. M. Forester’s Maurice was never published in its author’s lifetime because of a repressive regime of state censorship. Similarly, The Three-Body Problem by Liu Cixin, though initially ignored by a Western audience, has overcome both censorship and indifference towards science fiction to win major literary awards. Literary writers, such as Elena Ferrante also use and subvert the tropes of genre fiction such as romance in their art, to great effect. There is a growing awareness of how writers use genre and the tools of worldbuilding to write compelling fiction.

Is literary merit defined by a piece’s adherence to certain literary tropes and sacred cows? Or is literary merit defined by a piece’s brilliant spark, regardless of genre? Do you read to be comfortable or to be challenged and transported? What does it take for a piece of art to be popular not only in its original form, but also in its censored form? What kind of worldbuilding is necessary for a viewer to want to spend fifty hours watching it, or read not just a single 300-page book, but a five volume series? What inspired the over 27,000 derivative works published on Archive of Our Own tagged with the pairing Wei Wuxian / Lan Wangji? Can we expand our definition of literary merit to include not just traditionally literary works, but also those whose genres have traditionally been excluded? Reading Grandmaster of Demonic Cultivation will not answer these questions, but those who read the text will take a first step towards finding out.