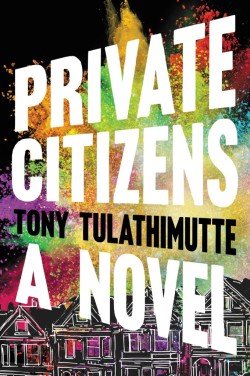 Tony Tulathimutte’s superb first novel, Private Citizens, is a razor-sharp satire of millennial culture, focusing on themes of class and technology. Set in the San Francisco Bay area in 2007, the novel is populated by a generation of misguided and occasionally misanthropic men and women drifting into their thirties. The book is ultimately compassionate in its ribbing, reminiscent of Chimamanda Ngozi Adichie’s Americanah, which, among other things, turned a much-needed comic eye on young Americans and their foibles. Wise and funny, at times uncomfortable, the novel’s tone suggests Philip Roth’s frank and often delightfully transgressive depictions of sex and neuroses; in ambition and narrative deftness, one might think of Jonathan Franzen.

The novel centers on four main characters — each absorbed in his or her own personal dramas — who struggle to be part of larger communities, even as they reject the world’s desire to identify people as types. To call the main characters “millennial” is accurate, but also simplifying: labels bring cultural and societal baggage. Perhaps, the novel suggests, sexuality, race, and socio-economic status are more complicated. Here Tulathimutte proves himself an intelligent, energetic writer of observation; lists, diatribes, and descriptions gather on the page in a dense but spectacular evocation of San Francisco and the people who crowd its streets.

Take Cory, for example: dreadlocked, bisexual, a self-described “chubby Jew,” she lives in a commune that used to be a cookie factory. In the shared space, she’s besieged and annoyed by her roommates while struggling against her father’s passive, unfailing belief. After her boss’ death, Cory inherits Socialize, a nonprofit that organizes fundraising events for good causes. Exhausted by canvassing and worn out by Socialize’s tendency to lose money, Cory believes “her generation’s failure was not of comprehension but of compassion, of splitting the indifference; its juvenile taste for making a mess; its indignant reluctance to clean it up; its limitless capacity for giving itself a break; its tendency to understand its privilege as vindication. And they weren’t even happy.”

Among the unhappy is Linda. Tattooed, fresh out of rehab, and angry, Linda is a writer who doesn’t write but is sure that her work would be better and more genuine than the writing of her former workshop peers. Linda is perpetually attaching herself to the wrong guys. In the novel’s first half, Linda’s abrasiveness is perhaps overly suggestive of the inner pain revealed in later diary entries, but it’s hard not to find pleasure in the depiction of her fellow Stanford undergrads: “careerist dickheads, thumb-sucking vegans, smug libertarians, batshit Republicans, pompous student-visa techies, precious study-abroad fuzzies, Division I Neanderthals, faculty lapdogs, marching band weenies recouping their squandered adolescences, and the unforgivably rich.” Landing in the Bay Area, unmoored, Linda flits between jobs — as a waitress, as a ghostwriter for college essays, and eventually as a nanny for an old friend, though this, too, ends disastrously.

Nearby, as well, is Henrik — one of Linda’s old flames. “A round approachable Danish face creased with smile lines,” the son of a Vietnam vet who continuously uproots his son’s life, Henrik manages to take correspondence courses and eventually lands at Yale, before a depressive, self-destructive episode relocates him to Stanford. Lonely, in the novel’s first half Henrik hires a sexual provider calling herself Lucretia, with whom he begins a complicated relationship.

But the true center of the novel is Will, an Asian-American who makes a living coding, while quietly amassing what might be the world’s largest collection of porn. His girlfriend, Vanya, is a former childhood beauty queen now paralyzed and wheelchair-bound following an accident during a group photo at Miss Teen Dixie Doll. Drawn to Vanya’s sexual voraciousness, Will witnesses her bubble-gum sweet exterior give way to a naked ambition to start her own company, Sable, that will “overhaul disability’s mainstream image . . . Sable will fight negativity with automated content filtering, crowd moderation, and aggressive brand management.” Part of Vanya’s plan is the launch of a twenty-four-hour live feed of her life, called WHEEL and DEAL — an endeavor into which Will is recruited, despite his reluctance to be a public figure. Tulathimutte is especially deft in parsing Will’s thoughts on identity politics. Pressured by Vanya to get a haircut, Will sorts through the vagaries of physical representation of race: “It wasn’t that he didn’t want to look Asian, just not like other Asian men. The otaku ponytail, the laissez-faire buzz cut, the bed of nails, the cue ball, the K-pop swoop, or the fugly center part, accompanying smooth or acned faces, hoodies and t-shirts, jeans with ornate stitch patterns.”

Tulathimutte is equally brilliant at nailing down the tech lingo and intricacies of niche outlets. Take, for instance, Vanya’s email signature: “Sable Founder/CEO/HBIC. Maker. Serial Entreprneuse. Idea Bot. Fashion Victim. Former Little Miss. Queen of the Internet. Sable — What’re *You* Looking At?” Later in the novel, on her father’s advice, Cory attends Handshake, a self-improvement and business development seminar. The program is a jumble of platitudes delivered in an earnest monologue: “Handshake makes a special kind of person — we make makers. We make thought leaders and entrepreneurs, people who represent the best of the human condition: the crazy dreamers who look around and say, ‘I can make this better.’”

In the end, the novel succeeds in no small part because of Tulathimutte’s distinctive voice. Private Citizens is a serious counterargument to the mistaken notion that comic novels can’t be serious literature and that readable and entertaining work can’t also be substantial, “literary” fiction. Here is a writer of ideas and character and a master of plotting and humor. At the novel’s end, a reader might not be too sorry to say goodbye to the self-absorbed, egoistic quartet at the book’s center, but no reader can fault Tulathimutte for creating realistic, if not always glamorous, reflections of the people we know — or worse, ourselves. The novel invites readers to look closer, and to wonder.