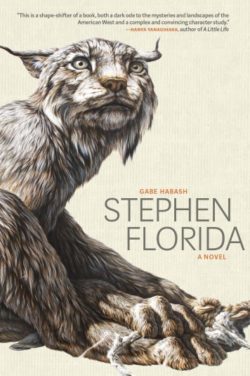 Gabe Habash’s confident debut, Stephen Florida, explores the single-minded intensity behind the pursuit of your goals. The result is a fast-paced novel about sacrifice and dedication, as it follows college senior and wrestling national championship hopeful, Stephen Florida, in his attempt to win the 133lb weight class.

Stephen Florida is a talented wrestler at an average college, but he is exceptional in his devotion to his sport. Willing to sacrifice beyond reasonable measure, Stephen makes his commitment to wrestling a credo. The novel reads like a manifesto, leading readers into the mind of a character filled with pain (“What will make my thoughts less ugly while I wait for my turn? I live in these little chambers of dissatisfaction like a frustrated prince. I’m constantly reminded that I’m not owed anything.”), humor (“I guess because sailboating and horse jumping, kite contests, golf, those aren’t sports. Anything that needs an object or water or an animal is not a sport. Wrestling is genuine and true and real.”), and extraordinary focus (“But I don’t need to be old to know that to look back and realize you didn’t push yourself for something you loved is the greatest regret you can have.”).

This voice-driven, first-person novel offers enormous access to Stephen’s interior. We are side by side with Stephen as he struggles to maintain the grueling pace he’s set for himself. This intensity is the driving force behind all of Stephen’s actions and feelings. There is only one thing for Stephen, and that one thing is winning. “The two best reasons to do anything are: 1. To prove to yourself you can do it [and] 2. To prove to everyone else you can do it.”

Habash, who revealed in an interview that he never wrestled, writes about the sport in a way that brings readers to an intimate level with wrestling’s nuances. Using Stephen’s detail-oriented personality and fixation on winning, Habash is able explore the sport’s technical details in a way that would feel dense or overwrought in another novel. In the end, I cared so much about the matches, about Stephen’s understanding of the sport, that I am a proud, newly minted wrestling fan.

Brett Espino’s mentality is simple: he doesn’t like to be bottom. Because one cannot bait from the bottom, he does not like bottom, even if he’s up 2–1. When I kneel down beside him, through my fingers I can sense in his skin his anxiousness to get out from the bottom so he can ride a 3–1 lead and resume the fishing game we just spent a period playing. There’s something like sympathy in taking my position behind him, placing my right hand on his elbow and my left hand seatbelting his stomach while he looks straight ahead, letting me. I place my ear on Brett’s back and hear his heart. “Oh Brett, I told you I was going to eat you,” I whisper to him. Something like sympathy, I could fall asleep if we stayed here long enough.

As much as this novel focuses on wrestling, it is so much more than a sports book. Because Stephen grapples with his place in the world outside of wrestling and because we have so much access to his thoughts and feelings, what starts as the pursuit of a lofty sports goal is in equal measure a journey for sanity, for balance, and for a life filled with meaning.

Stephen Florida explores, in detail, Stephen’s musings about life, his philosophies about people, and the value of winning, and while this kind of repetitious intensity could run thin on the page, Habash manages to explore new and deeper territory with each turn. Stephen is a single-minded character, but he is also intensely disturbed, potentially dangerous, and close to coming unhinged. This invitation to such a complex mind was one of my favorite aspects of the novel and part of my resounding applause. For a character so simple in his goals, Stephen is enormously deep.

Haunted by the death of his parents and a faraway aunt who flickers in, but mostly out of his life, it doesn’t take long for readers to learn that Stephen is lonely—terribly so—and outside of the value wrestling brings to his life, aimless and empty. Winning the college championship means, for Stephen, beating back the ghosts of his late childhood and overcoming the necessity to find meaning outside of physical excellence. In this way, Stephen Florida is a novel anyone can relate to. Who are we outside of our accomplishments? This is a question everyone has grappled with.

Still, the novel forces potential failure onto Stephen, revealing how desperate he is (how desperate we all are) for human connection. His wayward and flaky aunt, an all too-brief relationship with a classmate, and the commitment necessary to maintain meaningful friendships—Stephen struggles with them all. In an attempt to keep this pressure at bay, he leans into wrestling even harder. As we all know, this almost never works.

The novel takes a dark bent in Stephen’s desperate actions but Habash flexes some literary muscle in a character that acts as a physical representation of Stephen’s demons. The Frogman is an unknowable figure that haunts Stephen Florida—quite literally. He sends Stephen a note, waits for him in the corner of his bedroom, and is both omnipresent and never there, all at the same time. Habash keeps this element at an arms length in the novel, just enough to disquiet readers and disrupt Stephen’s focus. “The Frogman moves in the corner. I don’t look.” I appreciated this element of the novel so much. It wasn’t heavy handed, but delivered deftly, and in small doses. Just enough for readers, and Stephen to remember, that no amount of success or self-sacrifice will abate our need for human connection.

As the novel enters its second and third acts Habash writes, at times, sentence-long paragraphs revealing Stephen’s state of mind. For me, they were attempts to access Stephen’s thoughts as they were happening live. Some reflect emotional states: “Stephen Florida is losing it.” And others, quiet hints: “Suicidal behavior has been observed in more female animals than male and in more vertebrates than invertebrates.” The result is the rising tension of a novel that is almost impossible to put down.

While my criticisms of the novel are few, and Stephen’s character is beautifully complex, I found his self-awareness contradictory at times. His emotional intelligence is evident, and he takes great pride in his ability to focus, but he is portrayed as somewhat dim academically. Athlete-dumb. I found Stephen so interesting and his insights so pinprick smart, that this was occasionally hard to believe. Still, one could argue this is characterization at its best: Habash presents Stephen as one-track smart. He understands that his character cares about wrestling above all else. The rest, as Stephen says, is just noise.

The ending of Stephen Florida peaks beautifully. The rising action at the novel’s conclusion is reminiscent of films like Black Swan or Foxcatcher. The writing is so stellar, the journey so fully earned, and the ending is as satisfying as they come. Stephen Florida is a novel I’ll come back to as much for its literary merit as for its storytelling, a whitespace that we too often see in smart, literary writing. I can say easily, Stephen Florida is one of my favorite novels this year, and that Habash has set a high bar for the literary sports novel.