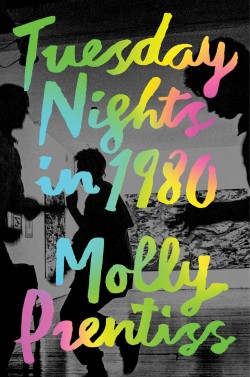 Molly Prentiss’s debut novel, Tuesday Nights in 1980, focuses on the soul of the art community in the New York City of decades ago. Prentiss refuses to hold punches, finding the spot that bleeds emotion and holding it open for all she can take. The book shifts between the perspectives of three characters: a synesthetic art critic, James Bennett; an orphaned Argentinian painter, Raul Engales; and a small town girl new to the big city, Lucy Olliason. The narrative builds on itself as these three characters’ lives weave together, united by their love of art and culture. When you come down to it, that is what much of this novel is about: the lasting effect that one life can have upon another.

All three characters are drawn to the New York art scene of the 80’s as an escape from their pasts. James wants to leave behind the ostracism he experienced in childhood; Lucy wants more than an unfulfilling small town life; and Engales seeks a sanctuary from a war-torn Argentina and the perceived betrayal of his sister. They come together, seduced by the promise of a New York City where they can achieve what seems impossible elsewhere. New York “had only one requirement for acceptance: interest.” James collects and writes about art, Lucy lives an exciting and spontaneous life, and Engales is independent and admired for his paintings.

However, Prentiss forces her characters to live in the real and unforgiving world, striking them with tragedies just as they feel they’ve made it. Their reactions to these tragedies reveal the true selfishness the promise of New York City requires. James loses his synesthesia when his wife has a miscarriage. Afterward, James’s obsession with his lost synesthesia becomes even more important to him than his wife, leading him to the things that bring it back: Lucy’s warmth and Engales’s art: “he had lied about the column . . . bought the painting without consulting her, and now he was sitting in front of it for long stretches, doing nothing but letting his eyes bulge from his head.” After falling in love with each other, Lucy and Engales are thrown into turmoil as a terrible accident befalls Engales a week before his artistic debut. Engales resents Lucy for pitying him rather than admiring him after his accident, to the point where Lucy feels: “Pure, unfettered hate, coming from the eyes of the man in whose apartment her suitcase lived now . . . in whose life she lived now.” Lucy’s need for excitement tears her between her love for Engales and a growing romantic interest in James. “Because she had to . . . She had to be alive in this moment.” In Tuesday Nights in 1980, the promise of New York City soon gives way to its gritty realities.

Prentiss has a unique way of storytelling. She breaks the mold by interjecting vignettes several times throughout the novel. She gives the reader scenes in the style of literary portraits that describe experience through different parts of the body. The portraits take the reader through the eyes, nose, mouth, hair, and limbs to give us a full understanding of each scene, such as in the vignette titled “Portrait of the Squat by an Orphan”: “Nose: Resin, glue, paint, booze, day-old spaghetti sauce and stale smoke. Smells that live in the building like its residents do: with the staunch conviction that they shall stay.” Among the grand and sweeping descriptions that permeate the story, the beauty of the simple made complex is a captivating throughline in Tuesday Nights in 1980.

Some of the most gripping passages of the novel are told from the perspective of James Bennett, whose synesthesia allows him to see, hear, smell, feel, and taste the world in ways no one else can. One sense activates another, bringing about a specific taste, smell, or look that is just as real to him as the thing itself. He describes Lucy as “a lime after a shot of strong tequila. She was no sunglasses and no sunscreen when you needed both. She was wet tar where your feet got stuck.” However, it is just as much the loss of synesthesia as it is the presence of it that makes James’s perspective so captivating. Mirroring the reader’s own disillusionment throughout the story, things that were once beautiful become cold and empty after James loses his synesthesia: “he . . . ran his hand through the slice of light that fell on her . . . Just white, bright, normal January light, falling onto his wife’s pale face. He saw nothing. Felt nothing. Nothing at all.” James’s abstract view of the world contrasts with Lucy’s fate-driven and optimistic view and Engales’s gritty and grounded view, creating a narrative that encapsulates many forms of the human experience.

Prentiss draws deeply flawed, imperfect, real characters. James’s highest moments of inspiration and expressions of art and love are made all the more real by his avoidance of responsibility. Similarly, Lucy inspires the people around her and loves Engales deeply, but she also hurts him in her quest for continual excitement. Engales, at times, seems the most flawed. He’s manipulative, stubborn, and unforgiving, yet he understands the truth of people in the world, living by the saying of his deceased father, “The scratches are what makes a life.” This line could be Molly Prentiss talking directly to the reader. The scratches on her characters are exactly what give them humanity. The flaws in Prentiss’s characters and in their lives make Tuesday Nights in 1980 a book that grips your heart and doesn’t let go.