Cassandra Trent returns home to small town Connecticut after a breakup to work for the local newspaper in Carole Burns’s excerpt from The Same Country. Cassie’s return is fraught with difficulty; Newfield is where her childhood friend Joe was killed, where his memory comes to life, accompanying Cassie in her car on her drive into work. Shortly after she moves home, Cassie discovers she’s not the only one who’s returned: her best friend Aggie, and Joe’s sister Jess have also come home. These chapters from The Same Country demonstrate a remarkable eye for tension, as Cassie’s return is soon overshadowed by what happens in nearby Bridgeton. Look for The Same Country next year from Legend Press. 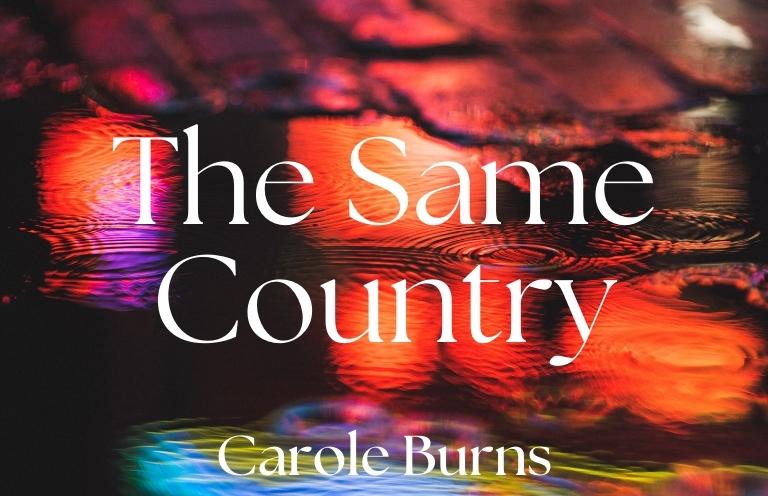 Occasionally in these small cities and towns that stretch along Long Island Sound, just occasionally, you can tell you’re near the sea. If you’re far enough from the highway and the malls, the sky above the warm, dark asphalt of a Stop & Shop in Bridgeton will tint a clear, pale blue; the air in the fresh-cut grassiness of a baseball field in Newfield take on the slightest hint of a salty breeze.

On my first morning back in Newfield, I drove to Aggie’s old house again, drawn like a woman to her secret lover’s grave, as if this were the sole purpose of returning to live in my hometown. It was Joe who compelled me to go—not Aggie—Joe who appeared to me that morning as just a flash, my waking dream, his face wavering near mine as I stirred, closer to me than he ever was in life. I heard him, next, as I made coffee alone, his voice rumbling into the still empty rooms of my still empty condo, disappearing into my gasp. Why had I thought Aggie might haunt me here? Aggie wasn’t dead.

And now Joe was sitting next to me in my car and talking, talking as I drove down the leafy streets of Newfield, revisiting old haunts—the Palace movie theatre, the Friendly’s where we used to linger for hours—then turning to head toward Aggie’s. The houses became smaller, older, closer to the road, as we approached the city line with Bridgeton, yet I barely noticed with Joe beside me, animated, though I couldn’t hear him this time, the same way I couldn’t remember what we all talked about twenty years ago at late-night diners, at our lockers, on Aggie’s back porch no matter the time or weather, night after night that I couldn’t remember. And maybe that’s why his words weren’t coming through, just his lips moving, his head nodding and tilting, his quick smile between words, his swerving shoulders as he swivelled to glance at Aggie then back at me, though Aggie wasn’t there either.

We were just a few blocks away from the house. So quick! This clutch of streets that led from our little town of Newfield to the more urban Bridgeton had seemed to me like an entrance to another world back then. I passed her road in hope of first finding the feminist bookstore and café where we’d sometimes browse the shelves and sip lattes like we were college students, or, across the street, the tiny gallery that once held an exhibition of portraits made from old radio parts—art, we learned. I braced myself for this world—once so alluring, so sophisticated—to look small, dowdy. This was just Connecticut, after all. I crossed the city line into Bridgeton.

The neighborhood had changed drastically. Lawns were untended, houses had not been painted in years, the blinds and curtains in windows were tattered and faded. Here was the Connecticut divide, sharper than I’d remembered. The shell of a car lay strewn in rusting pieces in someone’s yard. At a light, I spotted the short block of shops where the Readers’ Feast used to be. It was now a pizza joint. The gallery? A “checks cashed” store. A couple of teenaged boys swaggered by in high tops and baseball caps worn backwards and looked my way as if I didn’t belong. Rich and poor, this divide. Also white and black. I avoided their gaze and the light changed and I pulled into the old gallery’s parking lot to turn around and head back to Aggie’s. “But I used to live here!” I said to no one, to Joe, though it wasn’t even true.

And Joe had disappeared.