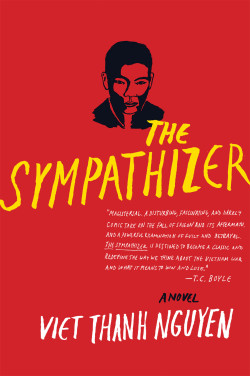 With The Sympathizer, available now from Grove Press, debut author Viet Thanh Nguyen demonstrates his prowess as a writer by creating a narrator who we shouldn’t trust but do anyway. This confidence is established in the book’s opening lines. Nguyen’s narrator, who remains nameless for the novel’s entirety, starts by saying, “I am a spy, a sleeper, a spook, a man of two faces.” He is a mole, a self-described snoop, a character we know to be well-versed in establishing trust only to take advantage of it later, but in his confession—and that’s really what the narrative is: a confession written in isolation to a man known only as “Commandant”—we become his confidants. We are taken under his spell and held captive until the novel’s finale.

The story begins in Saigon in the final month of the Vietnam War. For the past five years, the narrator has been living and working in the villa of a South Vietnamese “General” as his aide-de-camp and intelligence officer, all while acting as an undercover communist agent. As communist forces advance on Saigon, the narrator is forced to draw up a list of individuals who will be evacuated to the U.S. when chaos erupts. When Saigon finally falls, an event Nguyen depicts in all its startling and spinning horror and pandemonium, the narrator just barely makes it onto a plane bound for America. Along with a handful of friends and colleagues, he settles in Los Angeles and takes a job in the Department of Oriental Studies at the university he attended for six years during his youth. His mission as a student had been to better understand American ways of thinking:

My war was psychological. To that end, I read American history and literature, perfected my grammar and absorbed the slang, smoked pot and lost my virginity. In short, I earned not only my bachelor’s but my master’s degree, becoming expert in all manner of American studies.

He was sent to be a sponge, and the depth to which the narrator soaked up American culture shines through in his love of Dylan and Faulkner as well as the vocabulary he uses to tell his story, a vocabulary that had me reaching for a dictionary every so often to keep up. This second time around he is no longer a student but a trained spy and he continues his work as a double agent, reporting the General’s and other refugees’ activities to his blood-brother and co-conspirator Man in Vietnam.

The General becomes suspicious that there is an informant in the ranks, and twice the narrator must take desperate, fatal measures to keep his identity secret. He is quite literally haunted by the murders he commits to prevent his own. The ghosts of the men he kills in order to protect himself follow and taunt him daily, which shows just how burdened the narrator is by his conflicting loyalties to his communist comrades on the one hand and his day-to-day companions on the other.

The narrator describes himself as a man of two minds. “I am simply able to see any issue from both sides,” he says. He claims that his talent “possesses” him, and we in turn sympathize with him as it seems he is unable not to sympathize with his enemies. Seeing both sides means being divided, and we feel for the man who has been divided most of his life. He was born in Vietnam — a divided country — raised in America, and now works as a double agent. He is also a bastard, the son of a Vietnamese woman and a priest, and we get the sense that his “weakness for sympathizing” is partly a reaction against the lack of sympathy he received as a child born out of wedlock. “I credit my gentle mother with teaching me the idea that blurring the lines between us and them can be a worthy behavior,” he says. “After all, if she had not blurred the lines between maid and priest, or allowed them to be blurred, I would not exist.” We admire the narrator for his radical sympathy, but it is true, as the narrator says, that the “talent that possesses you — that is a hazard.” The same trait that opens the door to unexpected friendships and romances also tears him apart and inevitably leads to devastating betrayals.

This novel is not for the faint of heart, with graphic scenes of torture and abuse reminiscent of (but more nightmarish than) those in Orwell’s 1984. These scenes, though, are crucial to the narrative and balanced out by other moments in the novel that are equally rich in beauty and softness.

With his commanding and consistently authentic style, Nguyen inserts himself into what has been a predominately US-centric conversation and shakes up our traditional way of thinking about the Vietnam War. Nguyen, like the remarkable narrator he has so carefully constructed, reminds us that there are always two sides and helps us to see both.